The gallery and Ramakien Story

The gallery which surrounding every buildings in the temple, there are mural paintings which depict the story of the Ramakien, the Thai version of the Indian Ramayana epic. This story is the battle between Tosakanth who is the King of demons and King Rama (human being). The story tell about Tosakanth kidnaps the Queen of King Rama whose name is Sida, and takes her to Longka city, where he hopes that she will fall in love with him but she doesn’t. In the battle that follow, Tosakanth asks his innumerable relatives and friends to join him, whereas King Rama has a monkey army and the great monkey worriors under his command. Finally, Tosakanth is defeated and King Rama takes Sida back to Ayodhaya, his capital city. The painting consists of 178 sections. The first picture is located just opposite of the Spired Hall. And they proceed in a clockwise directions. The painting were first done in the reign of King Rama I and have been renovated many times. 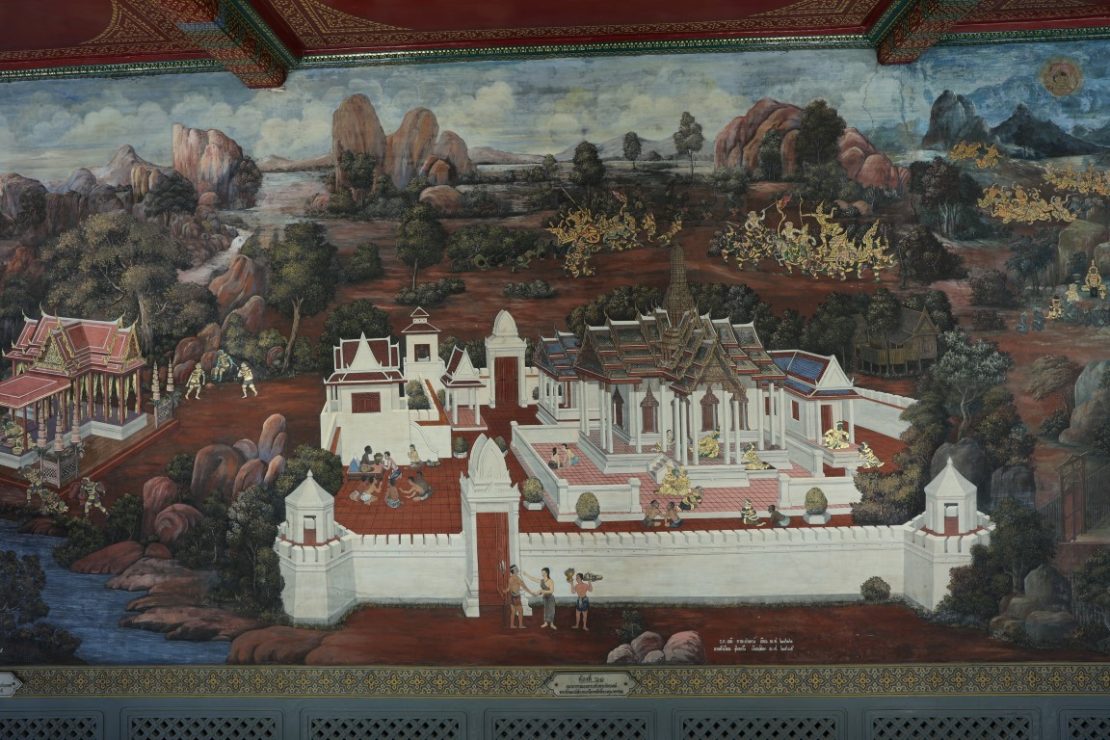 Ramadeva sent Laksman to fight against Kumbhakarna. He was hurt by the lance and lost his conscious. The monkey soldiers were angry and killed the enemy until dusk.Kumbhakarna withdrew the army back to Lanka and reported to Dasakanta that Laksman was killed.

FRAME 61 :Hanuman collected all the medicine to cure Laksman. 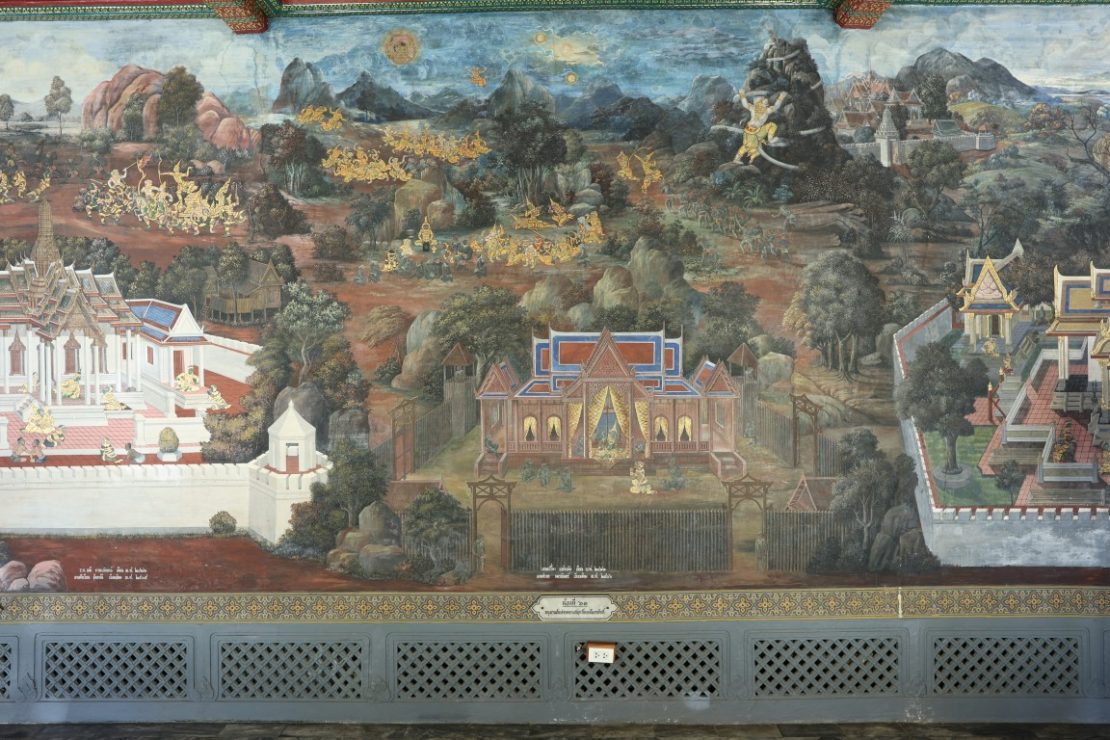 Ramadeva had been informed by Nilananda that his brother was hurt and rushed to the battle field.Bibhek advised that Laksman was still alive but he needed some magic herb and the holy water to compose a medicine. Ramadeva asked Hanuman to stop the sun not to shine in the morning and collect all those herbs and holy water at several places. Bibhek compose the medicine to cure the wound and make Laksman became alive.

FRAME 62 :Kumbhakarna enlarged his body to dam the river to stop it from flowing to Ramadeva’s camp. 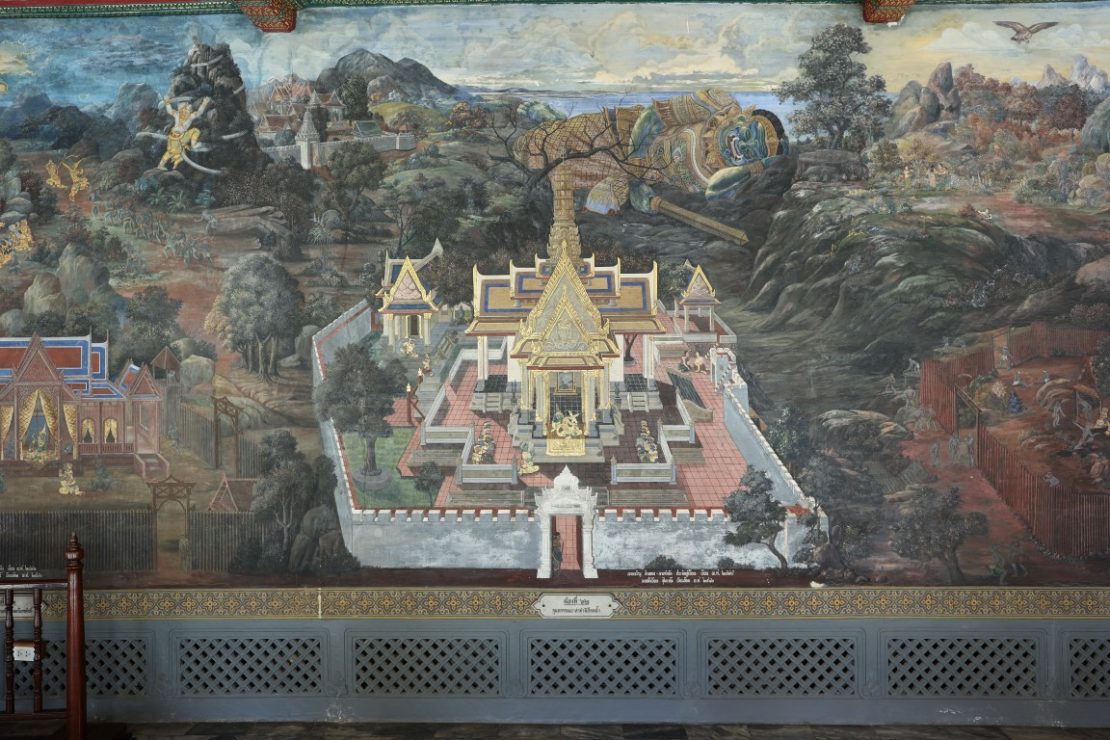 Kumbhakarna was exasperated to learn that Laksman was still alive by Bibhek’s helping hands. He enlarged his body to stop the river that flowed to Ramadeva camp so that the monkey soldiers would starve to die. There was only his wife and the other four ladies who knew where he was. 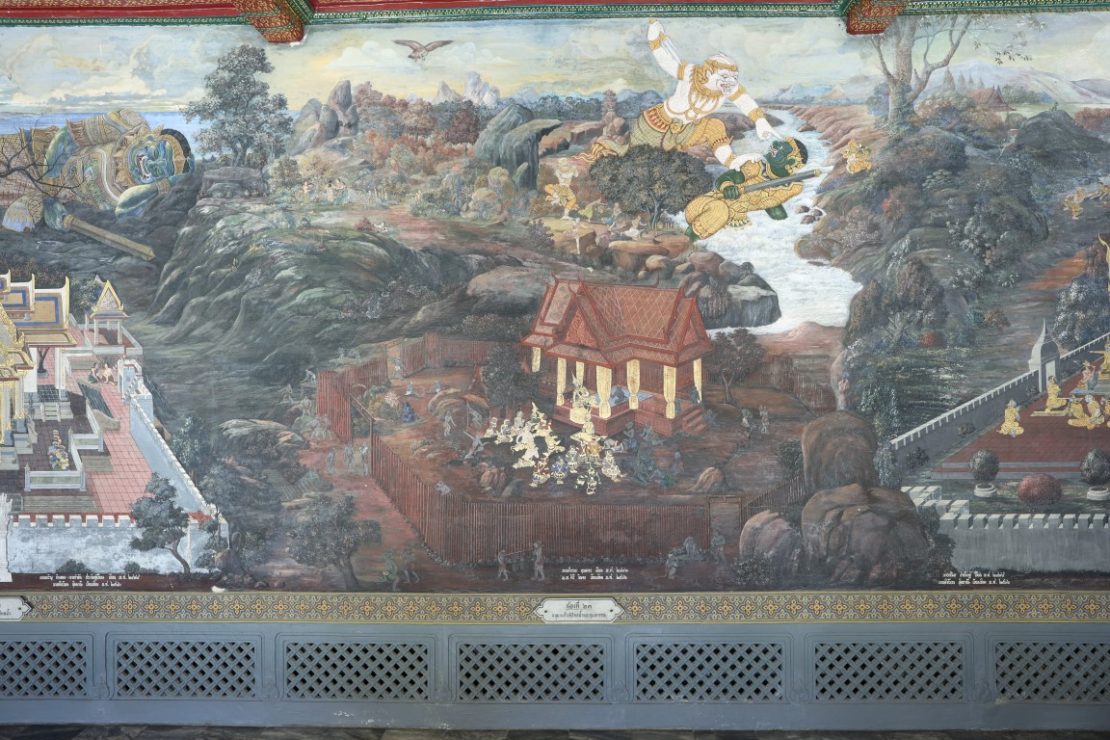 The monkey soldiers informed Ramadeva that the river was dried up. Bibhek informed that it was Kumbhakarna who made it. Ramdeva then sent Hanuman to correct the situation. Hanuman found Kumbhakarna by this talents and tricking and chased the demon away.

FRAME 64 :Kumbhakarna fought against Ramadeva and was killed by him.

Kumbhakarna informed Dasakanta that he would go out to fight again next day. There were bad signs occurred to him when he was going out to the battle field. In the battle, Ramadeva shot Kumbhakarna to fall down from the carriage. The demon saw Ramadeva had four arms with green halo, so he realized that Ramadeva was Narayana’s reincarnation.Kumbhakarnaapoligised to Ramadeva and died. 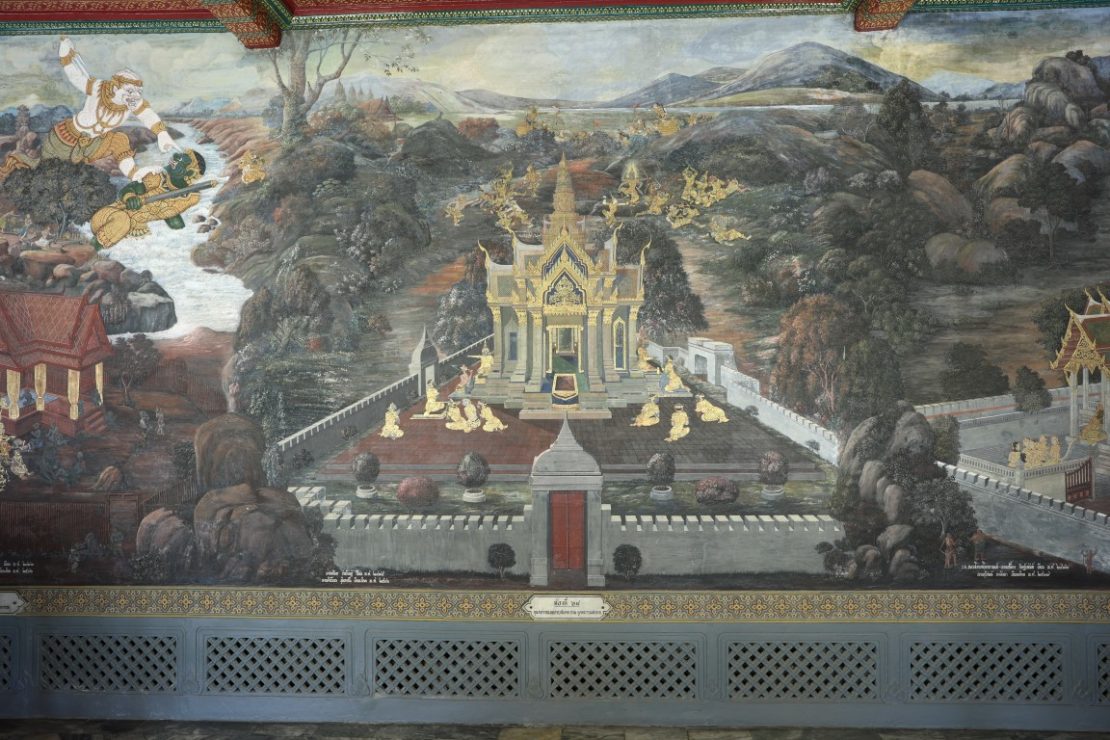 Dasakanta asked his son Indrajit to fight against Ramadeva. His mother – Mando, warned him not to underestimated Ramadeva’s army who killed many of their relatives. 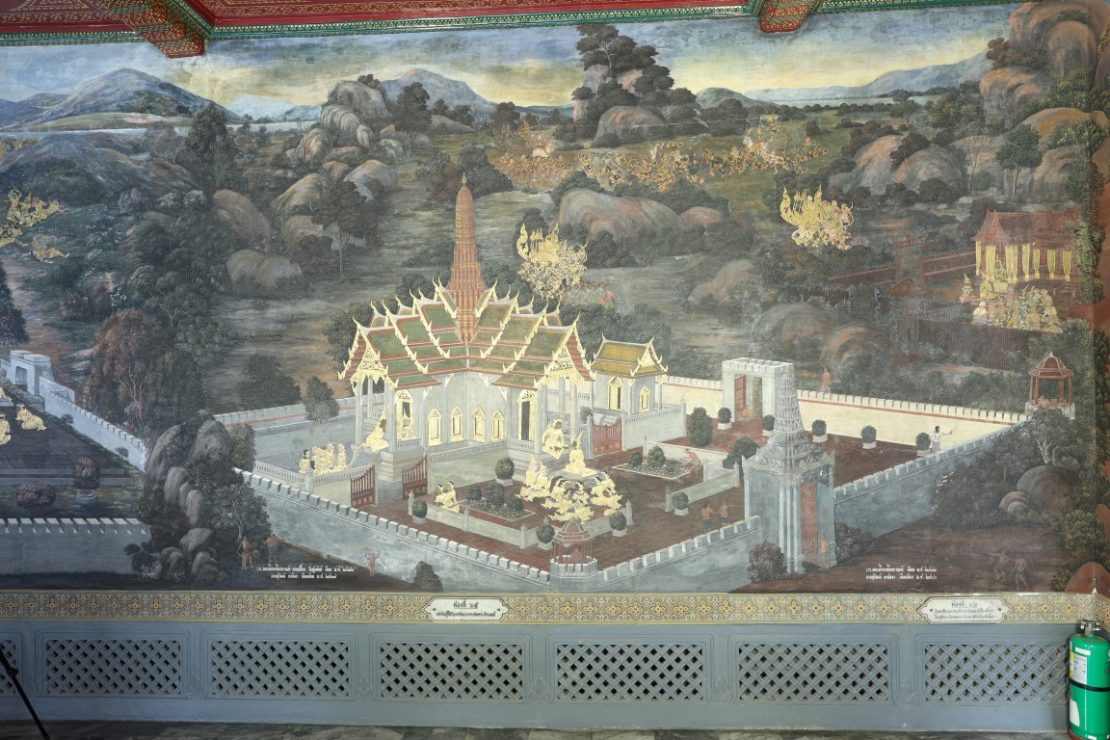 FRAME 66 :The first battle between Indrajit and Laksman, without distinctive result. 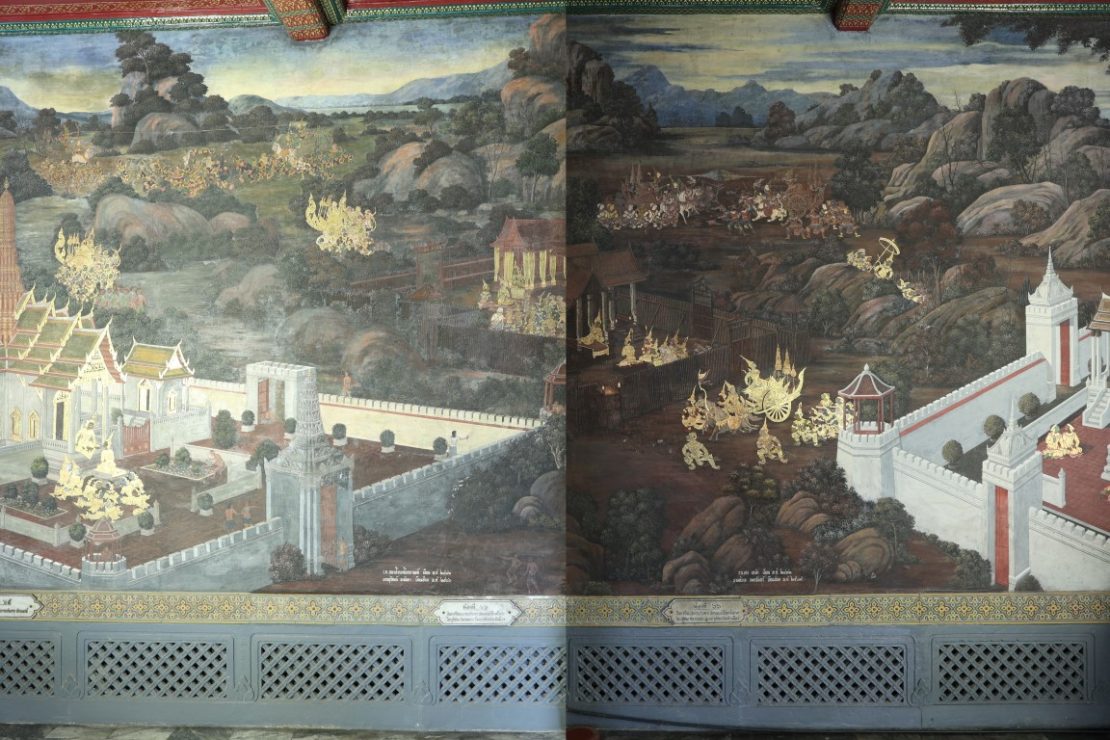 Indrajit went to the battle field to fight with Ramadeva. Laksman was out to the battle according to Bibhek advice.The fight had no decisive result and ceased at the dusk.

FRAME 67 :Indrajit performed a ritual to empower the Nagabas arrow. 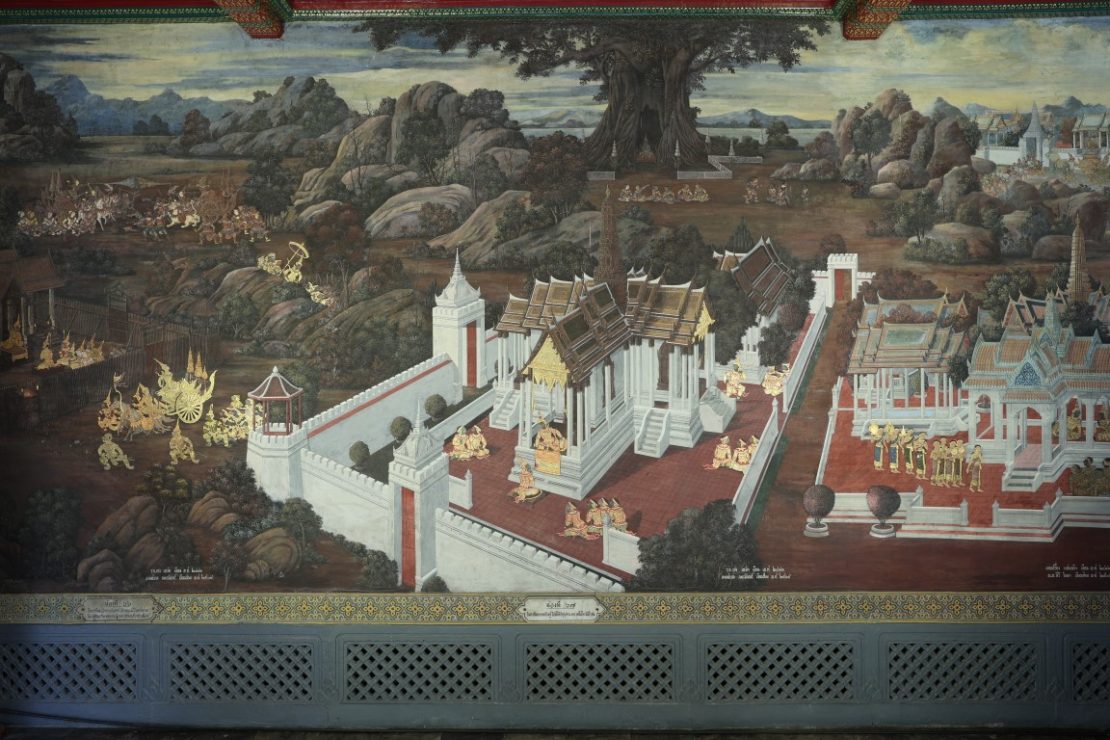 Indrajit performed a magic ritual for seven days to empower to his bow and arrow Nagabas. Because of the magic of the ceremony, the nagas (serpents) came to put potion to the arrow. 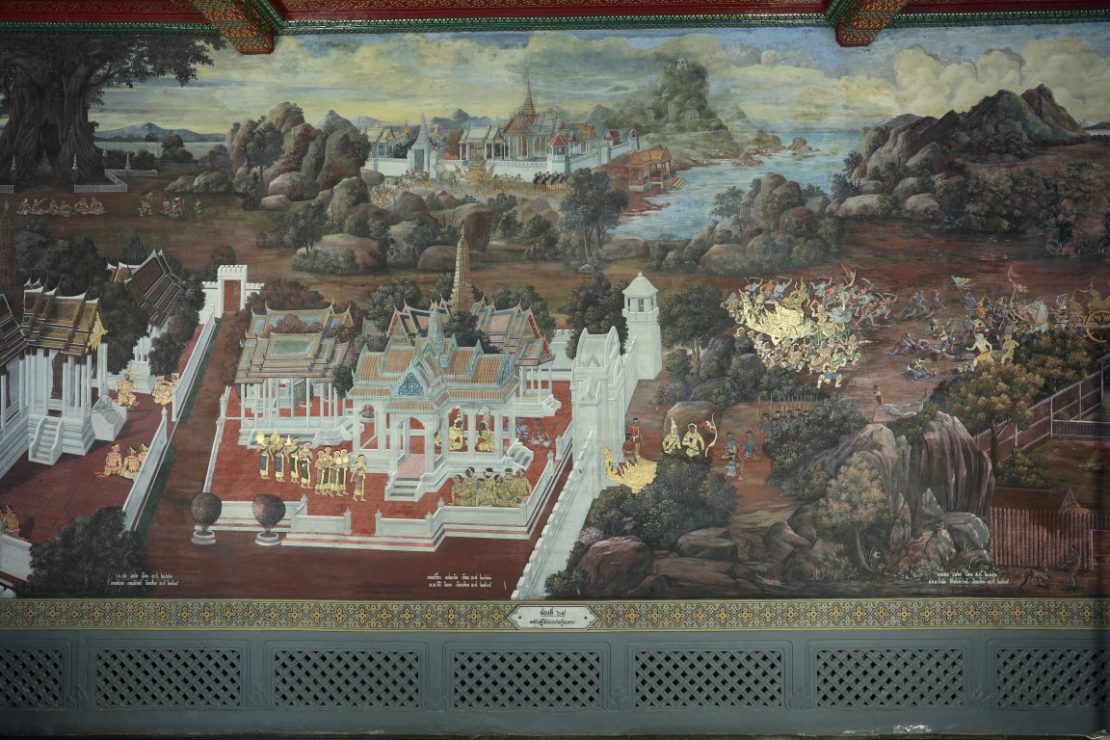 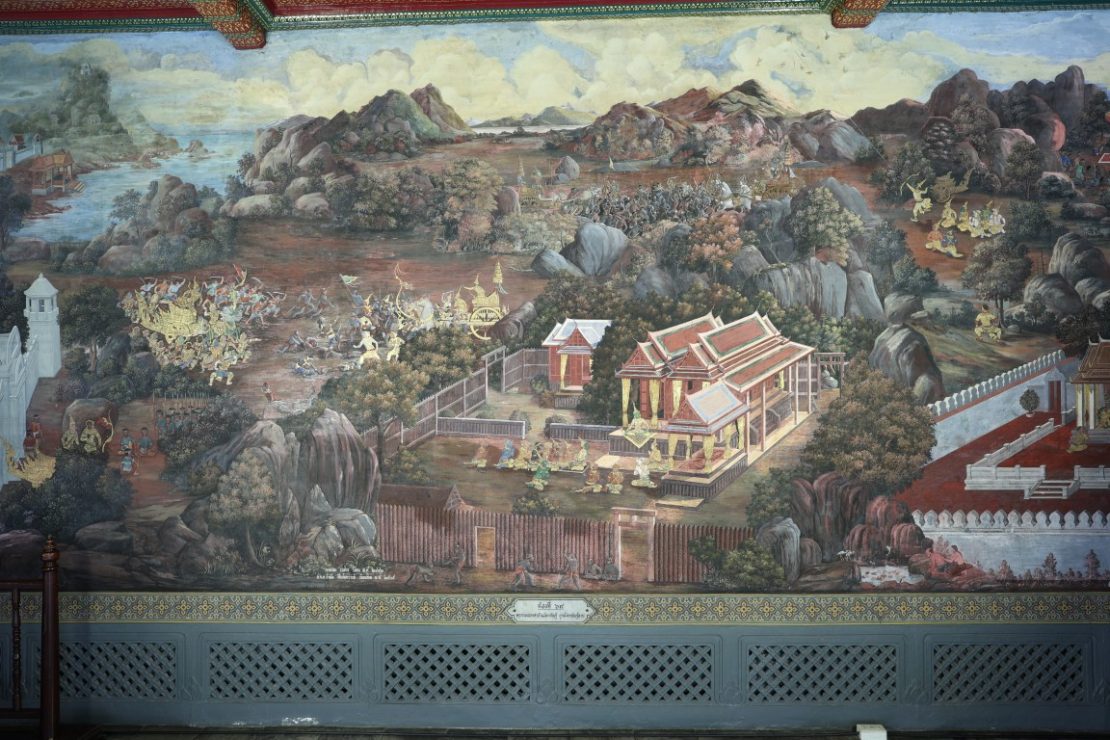 Dasakanta asked his nephew Virunyamukha who was Virunyacampang’s son to fight against Ramadeva’s army to retard for Indrajit to come back. 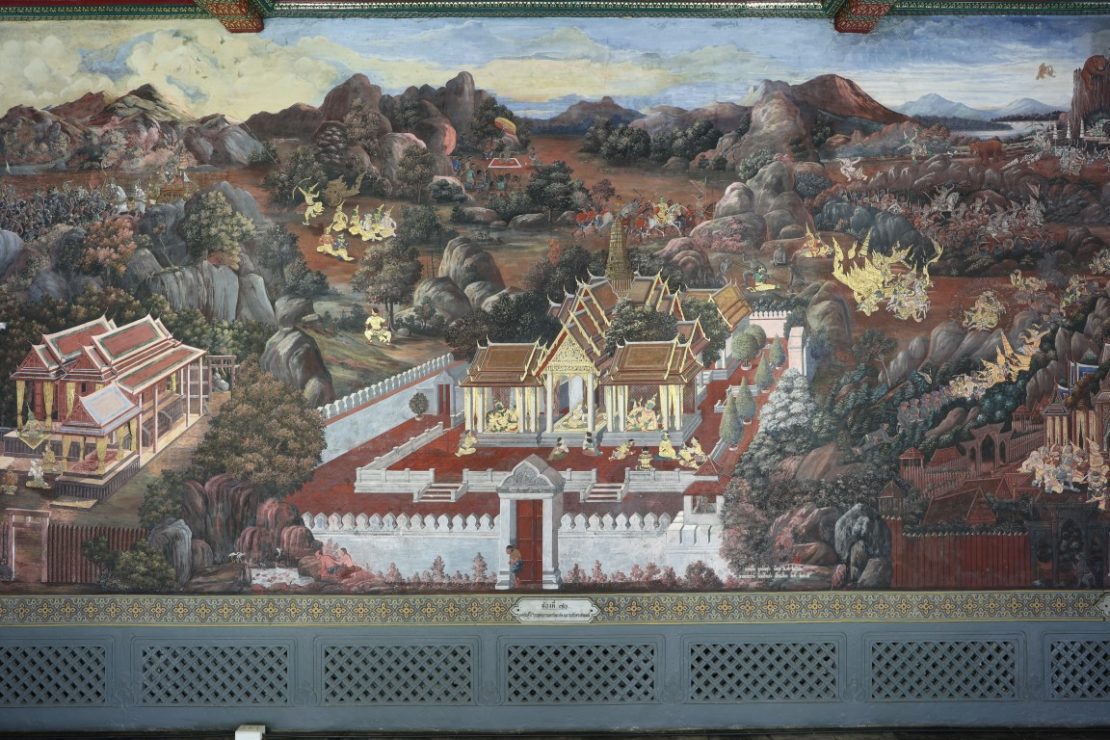 FRAME 71 :The ritual performance to empower the arrow was destroyed.

Bibhek unfold the mystery that Indrajit did the magic ritual to empower his bow and arrow at ArkasaGiri Mountain and suggested Ramadeva to send the soldiers to destroy the ceremony. Jambuvaraja volunteered to destroy the ceremony. He transformed himself to a big wild bear and destroyed the Rotan tree where Indrajit made the rite. He would need one more hour to fulfill the ceremony. Therefore, he asked Virunyamukha to retard the fight for him. At last, Virunyamukha was caught and brought by Hanuman to Laksman. 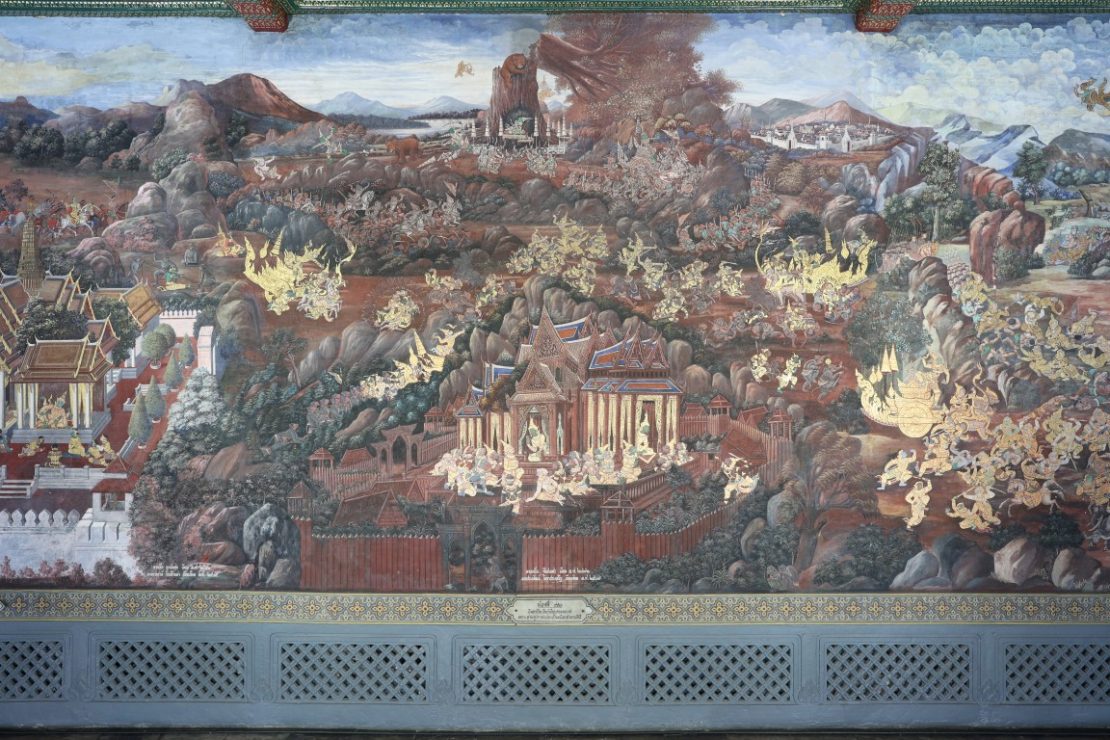 The gallery and Ramakien Story